Our van has a closet we use as a pantry, the only real problem was it's dark inside. It came with a single bulb at the top that was great when you hung clothes in there but not so much when you have shelves & stuff. The bulb was attached to a switch that activated when the door opened. Then the bulb broke. It was dark.
These LED lights are great!

I had an LED strip light that I'd picked up at Ikea some years back, I moved that from the mini-van to our class B. It worked well! The very top however could use some work.

I ordered a spool (16') of led lights. These are 12v, cutable and have a sticky back so you can just attach them where they are needed. We can now see the top shelf!

That was only 12-18 inches of lights used in the pantry... The cupboard above the sink is always dark, if you really 'need' light a flashlight will work but I have all these adhesive led lights left! 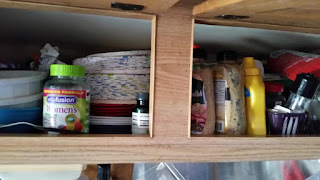 I wired them into the existing 12v system and ran them through a common on/off switch,  I ordered micro switches so opening each door will turn the appropriate light on. Nice! 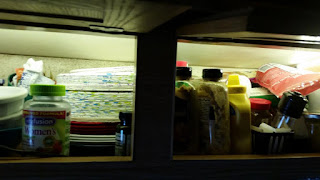 
I did have to go & find directions on using the connectors, it was a lot easier when I'd seen how it was supposed to go.


These things work well, easy to install & they don't cost much. If you decide to give this a try be sure and read everything on the Amazon page, it helped me.

The other day I was under the van running a 12v wire up front from the house battery fuse box in the back, I was attaching the wire to the van with tie-warps.

Tie-wraps is what I called them in the Coast Guard so that's what they are now. Some people know them as zip ties, plastic wraps, cable ties, hose strap or zap strap.

They are a pretty good way of attaching things that you want secure & quick to put on but not permanently.

I went & grabbed my bag tie warps and noticed I was almost out. Way back I bought a bag of 500 ties, that turned out to be a good thing to do... I use ties all over the place!


Yesterday I was in Lowe's looking for something in the electrical section (without luck, I ended up ordering what I needed from Amazon) and noticed I was in the tie-wrap section.

I bought another bag of 500, I went with black this time just to change the pace & bought the longer they had in big bags.

I went to my first civil war battlefield.


Over the years I've 'talked' with many people about the Civil War on the internet. It was there that I first heard it called "The war of northern aggression" & the argument that it was about money. I'd heard that it was about slavery too.
The only thing I know for sure was that more Americans died in it than any other war & it settled the States Rights question. 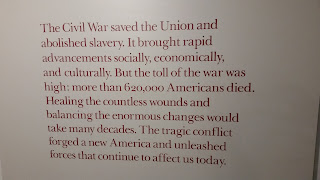 Chickamauga  is up by the Georgia/Tennessee state line, it's the first established National Battlefield and it's a big place.

The 20 minute movie in the visitors center was well worth the time as was a trip through the museum there. Taking a close look at the cannon on display out front was a help during the rest of the day.

For me, the timeline they have running around the walls in the museum was a huge education on that war...
I had many misconceptions on when things happened, that timeline straightened out those misconceptions.

The battlefield is huge. There are markers, placards, statutes & cannon scattered everywhere. "Scattered" is not the best word, they are put up where event actually happened & explain who was there, when they were there & what they did.


It took us several hours and we just browsed. There were many people on bicycles & that looked like a good way to view the battlefield.

Karen did not expect to get into this, it's not her choice in history....but she did.

It was more than a historic battlefield, it's a park. There were families having picnic's, groups having outings and a kid trying to fly a kite (with his mother's help).